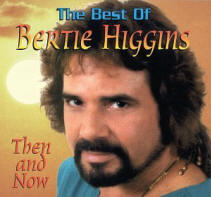 Elbert Joseph "Bertie" Higgins, who was born in Florida.  As a youngster, Higgins was a ventriloquist.  He started his music career very early in life.  As a teenager, Higgins played with the band The Romans (later changed to The Roemans given singer Tommy Roe's last name), who landed a record contract with ABC-Paramount Records in the early 1960's.  The Romans released three singles in the mid 1960's, and although the songs did receive some airplay, national fame was not in the cards.  It is worth noting, however, that The Roemans toured as the opening act for several notable bands, including The Rolling Stones, The Beach Boys, Roy Orbison, and Tom Jones.

After moving to Atlanta, GA, Bertie met record producer, Sonny Limbo, and doors began to open.  Bertie recorded the hit song "Key Largo", which was released in 1981 on the album Just Another Day in Paradise.  "Key Largo" was a huge hit for Bertie, and he was never able to match this level of success again.  Other Bertie Higgins songs you may recognize include the title track for Bertie's 1981 release, in addition to "Casablanca" and "Pirates and Poets" from his 1983 album of the same name.

Due partly due to his inability to follow up on his initial "Key Largo" fame, Higgins found himself with not only professional issues, but legal and personal issues as well.  As the years went on, Higgins eventually went back into the studio (1994).  At the time of this writing in early 2013, Higgins was still actively making music with his band, Band of Pirates, and living in California.  The current Bertie Higgins Discography is as follows: