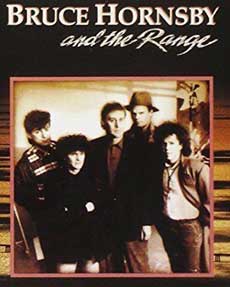 Bruce Randall Hornsby grew up in Williamsburg, Virginia and studied music in college.  Hornsby played guitar in his brother's band for a time, and after graduating from college (1977) and playing in local bars for a time, Bruce and his younger brother John decided to move to Los Angeles, where they spent a few years writing for 20th Century Fox.  After gigs as a session musician and a stint with Sheena Easton, Bruce moved back home to Virginia.

In 1984, Hornsby formed the band Bruce Hornsby and the Range.  The band landed a recording contract with RCA, and the album The Way It Is was released in 1986.  Many of you will remember the title track from this album, which was American Civil Rights inspired song that topped the charts.  Other songs that charted from this album where "Mandolin Rain" and "Every Little Kiss".  The band won a Grammy in 1987 for Best New Artist.  In 1988, the band released Scenes from the Southside.  Songs that charted from this release included "The Valley Road", "Defenders of the Flag", and "Look Out Any Window".  Another song you may remember is "Across the River" from the band's 1990 release, A Night on the Town.  This album had more of a rock and bluegrass jazz feel that previous albums.

As the years went on, Hornsby began branching out.  Not only was he a regular with the band The Grateful Dead, but he also began working as a sideman and producer for other groups, such as Don Henley, Bob Dylan, Stevie Nicks, and Bonnie Raitt.  In the 1990's, Hornsby produced as a solo artist.  His later releases have been eclectic at times.  In addition to solo work, Hornsby released new material with a band called The Noise Makers, and in 2007, he joined forces with Ricky Skaggs on a bluegrass project.  At the time of this writing, Hornsby was still active.  The Bruce Hornsby Discography is as follows: