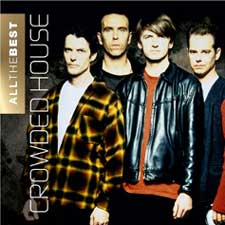 Crowded House was a pop rock band that hailed from Melbourne, Australia.  The band was initially formed by vocalist Neil Finn and drummer Paul Hester, who were members of a New Zealand band called Split Enz in the mid 70's.  In 1984, Split Enz decided it was time to split, and Finn and Hester decided to start a new band.  Initially, they named the band The Mullanes, which was later changed to Crowded House (and allusion to the small apartment they shared while recording their debut).

Crowded house debuted in 1986 with their self-titled debut album.  Based on their earlier success as members of Split Enz, they started their first tours in Australia and New Zealand.  This first album produced three hit songs, one of which remains their highest charting single to date.  The songs "Mean to Me" and "Something So Strong" charted, as did the song they are most known for, "Don't Dream It's Over", which became an international hit (no. 2 in the USA and no. 1 in Canada).  The band won several awards for this initial release (Song of the Year, Best Video, Best New Artist, etc.).

They also released Temple of Low Men in 1988.  This album featured a couple of songs that charted in New Zealand and Australia, "Better Be Home Soon" and "When You Come".  As the 1990's rolled on, Crowded House continued to produce.  Songs that they had some success with in the 90's included "Chocolate Cake", "Fall At Your Feet", "It's Only Natural", "Weather With You", "Nails in My Feet", "Locked Out", and "Everything Is Good for You".

During the 1990's, Crowded House began having some internal turmoil, and the band temporarily broke up as some members went on to solo projects, including Paul Hester's participation on Australian TV.  Hester killed himself in 2005.  In 2006, surviving members went back to the studio and continued on stage and in studio.  At the time of this writing, the Crowded House Discography was as follows: