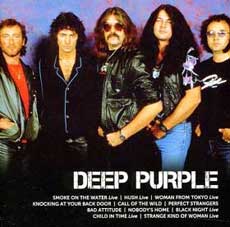 Deep Purple started out as an English rock band called Roundabout in the late 1960's.  By 1968, founding member Richie Blackmore suggested they change their name to Deep Purple, and the rest is history.  Their first release, Shades of Deep Purple, hit shelves in 1968.  Some of you older folks may remember the song "Hush" from this alubm.  Many consider Deep Purple to be the roots of Heavy Metal, although rumor has it they would disagree.

In the late 1960's, Deep Purple found themselves as the first hard rock band that teamed up with an Orchestra for two live album releases.  Although these albums were relatively successful, the band had intentions of heading in a completely different direction.  In 1970, Deep Purple released the album In Rock, which was the beginning of a much heavier sound for the band.  It was around this time that bands like Led Zeppelin and Black Sabbath were hitting the rock scene hard.  Deep Purple's 1971 release, Machine Head, topped the charts in the UK and hit no. 7 in the USA.  This was the album that featured the song "Smoke on the Water".

By the mid 1970's, the incessant touring and album releases began having a toll on the band, and members began to split (including Blackmore, who went on to form the band Rainbow with Ronnie James Dio).  With a new singer on board to replace Ian Gillan (David Coverdale of Whitesnake fame), Tommy Bolin was tapped to fill Blackmore's shoes.  After his death due to a drug overdose in 1976, Deep Purple officially disbanded.  It would be 1984 before the original members of the band would reunite.  In 1984, the album Perfect Strangers was released, and the band was back in the limelight once again with the hits "Knockin' At Your Back Door" and "Perfect Strangers".  Deep Purple also released The House of Blue Light in 1987, but it was not as successful, and by the late 1980's, conflict once again graced the band.

Eventually, Blackmore once again left the band, and Joe Satriani was tapped to fill his shoes temporarily.  Eventually, Deep Purple found a permanent replacement in Steve Morse (of Kansas), and the band found a renewed interest in new material.  At the time of this writing, Deep Purple could still be found in studio and on the road.  The Deep Purple Discography is as follows: