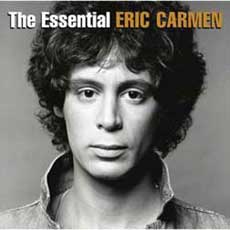 Ohio's Eric Carmen started performing and taking music lessons at a very young age.  By high school, bands like The Beatles and the Rolling Stones had influenced him greatly, and although he was a classically trained pianist, he taught himself guitar and joined various rock bands.  By the late 1960's, Carmen and some friends started the band The Raspberries, of which Carmen was the lead singer.  The Raspberries were a widely successful band, and some of you older 80's fans will remember their hit song "Go All the Way".

By 1975, the Raspberries were through, and Eric Carmen began a solo soft-rock career.  Carmen's first two singles off of his self-titled release were hits:  "All By Myself" and "Never Gonna Fall in Love Again".  Carmen released a total of three solo albums in the 1970's.  Other hit songs from the 70's you may remember include "She Did It", "Change of Heart", "Baby I Need Your Lovin'", and "Sunrise".  t is also worth mentioning here that at least two songs penned by Carmen became late 70's hits for Shaun Cassidy:  "That's Rock and Roll" and "Hey Deanie".

Carmen's first 80's release was Tonight Your Mine (1980) which did not chart.  Carmen decided to take a hiatus.  After his song "Almost Paradise" became a chart topper for Mike Reno and Ann Wilson (for the Footloose soundtrack), Carmen was back with a self-titled release in 1985.  You may remember the hit songs "I Wanna Hear It From Your Lips" and "I'm Through With Love" from this album, In 1987, Carmen contributed the hit song "Hungry Eyes" to the Dirty Dancing soundtrack) and "Make Me Lose Control", from his One Moment in Time compilation album, was also a chart topper (in addition to the song "Reason to Try" from the same album).

As the years have rolled on, Eric Carmen has focused more on writing songs for other artists.  It is worth noting that the Raspberries reformed in 2004 for several sold out shows and a new live album.  The Eric Carmen Discography is as follows:

ERIC CARMEN If I Change World..It Will Be Accident 1978 music biz promo advert
$4.50