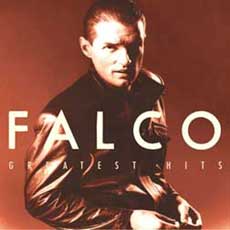 Austria's Johann (Hans) Hölzel, aka Falco, made a huge contribution to 80's music.  He was introduced to music at a very young age, and by 16, he was ready to try his hand and full time music.  In the late 1970's, Hans played in a band in West Berlin, and soon began going by the stage name "Falco", naming himself after an East German ski jumper.  After playing the bass in a couple of German rock bands into the early 80's, Falco began striking out on his own.

Falco's first release was the 1982 album Einzelhaft, featured the hit song "Der Kommissar" (The Commissioner in English).  This song was not initially a hit in the US, but became popular after a loose re-make by an American rock band called After the Fire (and covered by Laura Braningan as well).  Falco's early success was mostly in Germany/Austria, until he decided to start experimenting with English lyrics, and the result was the 1985 album Falco 3 and the song "Rock Me Amadeus".  This song was a no. 1 hit in the US and the UK, and 10 other countries.  Other hit songs from this album you may remember were "Vienna Calling" and "Jeanny".  Some of you may even remember the song "The Sound of Musik" from his 1986 album, Emotional.

As the years rolled on, Falco continued finding success, especially in Austria and Germany.  In 1998, Falco was killed in a car wreck, just prior to considering a come back.  The Falco Discography is as follows: