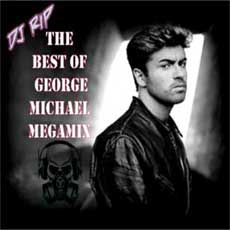 London's Georgios Kyriacos Panagiòtou, aka George Michael, started his career in music as a DJ playing local clubs and school events.  His first band was The Executive, which he formed with his schoolmate and friend, Andrew Ridgeley.  By 1981, however, Ridgeley and Michael were well on their way with their band Wham!

Wham! was a huge success in the early to mid 1980's.  They produced many hit songs, such as "Wham Rap! (Enjoy What You Do)", "Young Guns (For for It!)", "Club Tropicana", "Wake Me Up Before You Go-Go", "Freedom", "Everything She Wants", and "The Edge of Heaven".  It was during this time that George Michael began releasing a few solo hits, such as "Careless Whisper", "A Different Corner", and of course the Band Aid song "Do They Know It's Christmas?"  Tensions where high, and by 1986, Wham! was done and Michael was officially a solo artist.

George Michael's first release as a 100% solo artist was 1987's "I Knew You Were Waiting (For Me)" with Aretha Franklin.  This same year he released his first solo album, Faith.  This album featured several hit songs, including the controversial "I Want Your Sex", the video of which even MTV would only play late at night.  Some of you may remember that a toned down version of the song, titled "I Want Your Love", was spun on some stations.  Other hit songs from this album included the title track, "Faith", and the songs "Father Figure", "Kissing a Fool", "One More Try", and "Monkey".

By the 1990's, Michael was tired of the promotional nature of the music business, and he decided that future releases would not include music videos or other types of promotional stunts.  The hits certainly did not stop.  Some 90's hit songs you may remember include "Praying for Time", "Freedom! '90", "Don't Let the Sun Go Down on Me" with Elton John, "Too Funky", "Somebody to Love" with Queen, "Jesus to a Child", "Fastlove", "Spinning the Wheel", and many more.