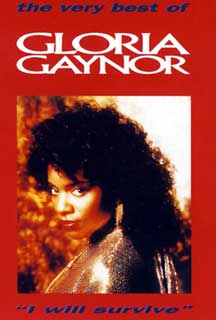 New Jersey's Gloria Gaynor grew up in a musical household in the 1950's and 60's.  Although Gaynor knew she wanted to sing, she attended beauty school and took business courses as a back up plan.  By the 1960's, Gaynor had landed a singing job with the band Soul Satisfiers, and by 1965 had released a single on a small Chicago label.

It wasn't until 1975 that Gloria Gaynor began real success.  With the release of Never Can Say Goodbye, Gaynor was solidified as a disco artist, with the marathon songs "Honey Bee", "Never Can Say Goodbye", and "Reach Out, I'll Be There" being huge chart topping club hits.  Gaynor continued having minor success until 1978, with the release of Love Tracks, which featured the hit song "I Will Survive".

Gaynor's early 80's albums were largely ignored due to the lack of interest in Disco as the 80's rolled in.  Gaynor became a Christian in the early 80's, and thus shunned much of her earlier musical days.  Her last hit in the USA was "I am What I Am", released on I Am Gloria Gaynor (1984).  Since her heyday, Gaynor has had some charting US Dance songs as well as hits in the UK and other countries.  The Gloria Gaynor Discography is as follows: