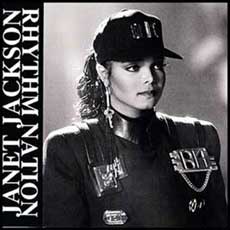 Janet Jackson has been a part of pop culture since the early 1970's.  As part of the iconic Jackson family, Janet was the youngest.  Her aspirations were not to go into show business, but her father had other ideas, based on the success of the Jackson 5.  At an early age, she performed with her brothers and sisters, as well as on the CBS variety show called The Jacksons (1976).  Janet would go onto star in other 70's and early 80's shows as well, such as Good Times, A New Kind of Family, Fame, and Diff'rent Strokes.

Moving into the music arena, Janet Jackson's first album debuted in 1982 (self-titled release), and her second in 1984 (Dream Street).  Although these first two did fairly well on the R&B charts, it was her 1986 release, Control, that landed her great success.  It featured a number of hit songs, including "What Have You Done for Me Lately", "Nasty", "When I Think of You", "Control", "Let's Wait Awhile", and "The Pleasure Principle".  The album Janet Jackson's Rhythm Nation 1814, released in 1989, also feature several hit songs: "Miss You Much", "Escapade", "Alright", "Come Back to Me", "Love Will Never Do (Without You)", "Black Cat", and "Rhythm Nation".

Janet Jackson had a number of hits well into the 1990's and 2000's, but we will not list them all here since our focus is the 80s, baby!  At the time of this writing, Janet Jackson was still very active.  She could be found on the silver screen, in studio, and on stage.  The Janet Jackson Discography is as follows: