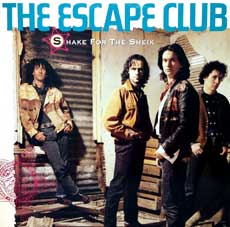 The Escape Club was an English pop rock band that officially formed in London in 1982.  The band was a mixture of members from the bands The Expressos and Mad Shadows, both of which met with their own level of success.  The band's first gig as The Escape Club was in 1983.  Their sound began catching on, and more and more club dates were booked.  Before long, they released their first single, "Breathing", on an independent label.

After much hard work, The Escape Club finally landed a record deal with EMI, and their first album, White Fields, was released in 1986.  This initial album did not fair very well, but EMI agreed to give the band one more chance, and Wild Wild West was released in 1988.  It was this album that featured the No. 1 Billboard Top 100 song "Wild Wild West", the video of which found much airplay on MTV.  Another single from this album that made it into the top 40 was "Shake for the Sheik".  Some of you may even remember the song cover of The Door's "20th Century Fox", which appeared on the the TV show The Wonder Years soundtrack.

In 1990, The Escape Club tried to follow up their previous success with the release of Dollars & Sex.  The song "I'll Be There" from this album reached No. 8 on the Billboard charts.  It was not long after this final release that the band broke up.  Interestingly enough, at the time of this writing, The Escape Club was the only band to have had a no. 1 hit in the USA that did not chart in the UK.  The band did reform in the 2000's, and at the time of this writing in 2013, they were still very active with plans to release a best of album.  The current The Escape Club Discography is as follows: