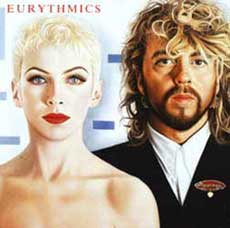 Annie Lennox and David Stewart met in a restaurant, where Lennox worked, in 1975.  Romantically involved, they started out in 1976 as a band called The Catch, and later as a band called The Tourists.  These bands met with some success, but the duo did not feel their artistic needs were being met, so they soon broke free and created the band The Eurythmics (named after an exercise system).  They made sure to only use other band members as needed, thus maintaining control of the artistic direction of the group.  They managed a contract with RCA, while at the same time ending their romantic relationship.

The Eurythmics debuted in 1981 with the album In the Garden, which did not fair too well.  After struggling for a breakthrough, it came in 1983 with the release of Sweet Dreams (Are Made of These).  The title track was a huge hit in the UK and the USA.  The song "Love is a Stranger" also became a hit after being re-released.   The same year they followed up with the album Touch, which featured the hit songs "Who's That Girl", "Right By Your Side", and "Here Comes the Rain Again".  In 1984, the Eurythmics released the soundtrack for George Orwell's 1984, called 1984 (For the Love of Big Brother), which featured the hit song "Sexcrime (Nineteen Eighty-Four)".  Be Yourself Tonight (1985), featured the hit songs "Would I Lie to You", "There Must Be an Angel (Playing with My Heart)", "Sisters Are Doin' It for Themselves", and "It's Alright (Baby's Coming Back)".

By the 1990's, the stress of the last 8 years had taken a toll on the duo, and the Eurythmics split up and Lennox and Stewart went onto solo careers.  Finally, in the late 1990's, the duo reunited for a new studio album, while continuing successful solo efforts.  The duo still collaborates from time to time, and new material is not out of the question.  At the time of this writing, the Eurythmics Discography was as follows: