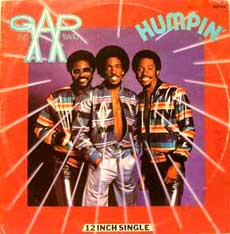 The roots of the R&B group The Gap Band can be traced back to 1967, when member Ronnie Wilson formed the Greenwood, Archer, and Pine Street Band.  Before long, the band was comprised of brothers Ronnie Robert, and Charlie Wilson.  Eventually, the band changed their to The Gap Band, and their first mid 70's releases, which were closer to the funky sound of the early 1970's, did not do very well.

In the late 1970's, The Gap Band got on a new label.  They released another self-titled album in 1979, which featured the R&B hit songs "Open Up Your Mind (Wide)" and "Shake".  Other R&B hit the same (or folowing) year were the songs "Oops Upside Your Head" and "Steppin' Out" from The Gap Band II.  It was the band's 1980 release, The Gap Band III, when fame really began to catch hold for the band.  Hit songs from this release include "Burn Rubber on Me (Why You Wanna Hurt Me)" and "Yearning for Your Love".  Many of you will remember the hit song "You Dropped a Bomb on Me" from Gap Band IV (1982), which also featured the hit songs "Outstanding" and "Early in the Morning".

The rest of the 80's found The Gap Band releasing some great R&B hits, but they failed to repeat their success of the early 1980's.  Other 80's R&B hits released included "Jam the Motha", "Beep a Freak", "I Found My Baby", "Disrespect", "Going in Circles", "Big Fun", "Zibbie, Zibbie (Get the Money)", and "All My Love".  By the late 1990's, the Gap Band was split up and some members went onto solo careers.  At the time of this writing, the Gap Band Discography was as follows:

Gap band When i look in your eyes Mercury 76101 Soul Northern Rocksteady
$8.00