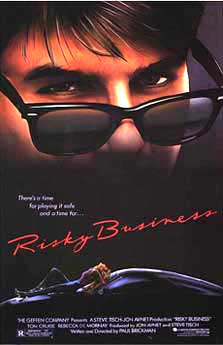 "There's a time for playing it safe and a time for...Risky Business".  Risky Business was a 1983 comedy that starred Tom Cruise as Joel Goodson, Rebecca De Mornay as Lana, Bronson Pinchot as Barry, and Joe Pantoliano as Guido.  This was the movie that launched Cruise’s career, considered to be one of the best movies of 1983.  Not only was it a hit with critics, but was also a large draw at the box office.

In this movie, Cruise plays the role of high school student Joel Goodman, who lives with his wealthy parents in Chicago.  His parents have big “Princeton” plans for their son, but Joel is not quite ready to give up his freedom.  When his parents leave him alone while they go on a trip, Joel goes wild.  Not only does he do everything his parent’s told him not do, but also some things they would have told him not to do had they thought he might try to do them.  One thing in particular was Joel’s hiring of a prostitute named Lana, who after a night of doing her job with Joel, stole Joel’s mother’s Steuben crystal egg whilst Joel was away trying to get her cash payment from the bank.  When Joel tracks down Lana, he is confronted by her pimp, Guido (Pantoliano), who pulls a gun and chases Joel away.

As the movie progresses, Joel continues seeing Lana.  One evening, Joel’s dad’s Porsche ends up getting severely damaged, and in order to raise the cash to pay for the repairs, the group decides to turn Joel’s house into a brother, for one night, to raise the cash to pay for the car repairs.  After a successful night, Joel ends up having to use the money he earned to buy back all his family’s furniture, which had been stolen by Guido and held for ransom.  In the end, Princeton accepts Joel as a student, everything is put back in its place just before his parent’s arrive home, and Joel continues his relationship with Lana.