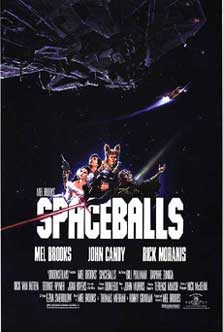 Spaceballs was a Mel Brooks sci-fi comedy spoof released in 1987 (it was a parody of Star Wars).  The movie starred Mel Brooks as President Skroob/Yogurt, Rick Moranis as Lord Dark Helmet, John Candy as Barfolomew, Bill Pullman as Captain Lone Starr, Daphne Zuniga as Princess Vespa, and Joan Rivers as Dot Matrix.  Although the movie received mixed reviews from critics, it did fairly well at the box office, with even George Lucas himself getting a laugh out of it.

In the movie, Planet Spaceball is out of air.  The president of Spaceball, Skrrob (Brooks), plans to steal air from the nearby planet Druidia by taking the Druidian princess, Princess Vespa (Zuniga), hostage.  President Skroob sends Dark Helmet (Moranis) to Druidia to carry out the task, but they arrive too late, as Vespa had just left the planet on her own accord to avoid a marriage.  King Rolad of Druidia hires Lone Starr (Pullman) and Barf (Candy) to find Vespa before Dark Helmet.  Lone Starr is happy to oblige, as the reward money will help him pay his debt to Pizza the Hut (think Jabba the Hut and Han Solo’s debt).  They end up crashing onto a moon, where they meet with the wise Yogurt (Brooks), who teaches Lone Starr the power of “the Schwartz”.

Eventually, Dark Helmet captures Vespa, takes her to planet Spaceballs, and threatens to reverse her nose job if King Roland does not hand over the air.  In the end, using “the Schwartz”, Lone Starr is able to thwart Dark Helmet’s efforts to suck the air out of Druidia using a huge vacuum cleaner shaped ship.  In the end, Lone Starr finds out from Yogurt that he is actually a prince, which makes him eligible to marry Vespa.  Lone Starr disrupts her arranged marriage just in time, and takes her hand in marriage instead.