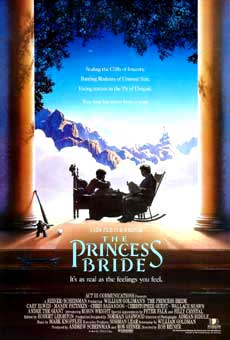 "Scaling the cliffs of insanity.  Battling rodents of unusual size.  Facing torture in the pit of despair.  True love has never been a snap".  The Princess Bride (1987) was a romantic, fantasy adventure comedy by Rob Reiner.  The movie was based on the 1973 novel by William Goldman. The movie starred Robin Wright as Buttercup (Princess of Florin), Cary Elwes as Westley, Billy Crystal as Miracle Max, Mandy Patinkin as Inigo Montoya, and the late Andre the Giant as Fezzik.  The movie was a hit with critics, including Siskel and Ebert, yet it was only a moderate box office success initially.  However, after the movie was released to home video, it became a bit of a cult classic and earned huge profits.  It is still considered by many to be one of the greatest comedies after created.

In this movie, farm hand Westley (Elwes) is in love with Buttercup (Wright), the daughter of his boss.  Luckily for Westley, the love is not unrequited, and in order for the relationship to come to fruition, Westley must seek his riches elsewhere.  On his trek to make his dream a reality, he is attacked by the Dread Pirate Roberts, and thinking him dead, Buttercup agrees to marry Price Humperdinck, heir to the throne of Florin.  Before the wedding takes place, Buttercup is kidnapped by three outlaws:  Vizzini, Fezzik the giant, and Inigo Montoya.  In hot pursuit is the prince’s army, as well as an unknown masked man (actually it is Westley).  Come to find out, the kidnapping was a deliberate act by the prince, who intended to have Buttercup killed in order to begin a war.

Ultimately, Westley rescues Buttercup, but the two are captured by Humperdinck.  When Inigo realizes he needs Westley’s help to seek his revenge against a guy named Rugen (who killed his father), he rescues Westley from certain death.  In the end, the bad guys are killed, Inigo gets his revenge, the prince is put to shame, Westley reaches Buttercup just before she kills herself, and everyone lives happily ever after.