Home » silver-screen » Comedies » Sure Thing, The 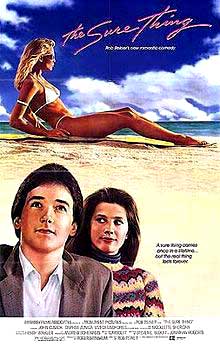 "A sure thing comes once in a lifetime...but the real thing last forever".  The Sure Thing was a 1985 Rob Reiner romantic comedy.  The movie starred John Cusack as Walter “Gib” Gibson, Anthony Edwards as Lance, Tim Robbins as Gary Cooper, and Daphne Zuniga as Alison Bradbury.  It is interesting to note that John Cusack was only 16 years old at the time, and had to be emancipated from his family to star in the movie.  For the most part, the Sure Thing received positive reviews from critics.  It was a hit with box office attendees, ultimately earning 18 million dollars on a $4.5 million dollar budget.

In this movie, high school friends "Gib" Gibson (Cusack) and Lance (Edwards) are heading off to college on opposite sides of the country.  Lance goes to UCLA, while Gib attends school back east.  While at college, Gib’s finesse with the girls is lacking, and his attempt to get close to Alison Bradbury (Zuniga) fails.  Feeling depressed, Gib is invited to spend Christmas break in California with Lance, who has a nice girl waiting there for him who is, as Lance describes her, a “sure thing”.  Gib ends up hitching a ride with Gary Cooper (Robbins) and Allison, who are both also on their way to California (Allison’s boyfriend lives there).  They don't get along at all at first, and Cooper kicks them out of the car and they have to hitchhike.  Because it is a long trip, feelings begin to change between the two of them.

In the end, the hook up with the “sure thing” does not pan out, Alison’s feelings for Gib cause a rift with her boyfriend, and after a bit of confusion, misunderstandings, and forgiveness, Gib and Allison end up together as boyfriend and girlfriend.

Movie "The Sure Thing" Original Shooting Script with John Cusack
$35.00

NICOLETTE SHERIDAN IN THE SURE THING BIKINI 8X10 PHOTO
$9.75