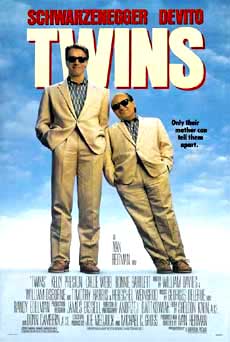 "Only their mother can tell them apart."  Twins was a pretty funny Ivan Reitman movie released in 1988.  The movie starred Danny DeVito as Vincent Benedict and Arnold Schwarzenegger as Julius Benedict, who were genetically engineered fraternal twins.  The movie received mostly negative reviews back in the day, although some heavy hitters, like Roger Ebert, liked it.  Regardless, it was a huge financial success, earning over a 200 million dollar profit.  At the time of this writing, a sequel to the movie, starring the same twins, was planned for some time in 2016.

In this movie, a genetics laboratory attempted to create the perfect child, in an experiment that went wrong.  Twins ended up being born, and the mother was told that one of the twins, Julius (Schwarzenegger), died at birth, and was never told about the other twin, Vincent (DeVito), at all.  Julius was adopted by one of the scientists and grew up privileged, while Vincent grew up in an orphanage, neither one knowing about the other nor the fate of their mother.  On Julius’ 35th birthday, his father told him that he had a twin brother, so Julius set out on a track to find him.

As the two meet and gain eachother’s trust, Julius convinces a reluctant Vincent to help him find their mother.  There is an interesting dichotomy between the two, as the street wise Vincent is not a compliment to his naive, yet intelligent brother.  During the trek to find their mother, the two get mixed up in one of Vincent’s schemes to steal millions of dollars by selling a stolen device.  As they head off to find one of the scientists who conducted the experiments in order to find out their mother’s identity, the original owners of the device are in hot and murderous pursuit.  In the end, the boys are safe, they meet the mother, give the device back to the authorities, and use the $50k in reward money to start a family business.