Home » silver-screen » Dramas » Against All Odds 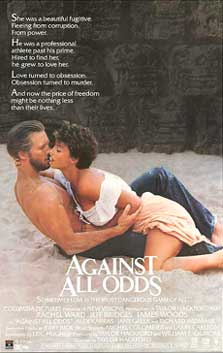 "She was a beautiful fugitive.  Fleeing from corruption.  From power.  He was a professional athlete past his prime.  Hired to find her, he grew to love her.  Love turned to obsession.  Obsession turned to murder.  And now the price of freedom might be nothing less than their lives ".

Starring Jeff Bridges as Terry Brogan, Rachel Ward as Jessie Wyler, and James Woods as Jake Wise, Against All Odds was released in 1984.  The movie received mix reviews, but still turned a profit.

In this movie, Terry Brogan (Bridges) is a washed-up professional football player that has been dropped by his team.  In need of money, he agrees to hunt down the girlfriend of a bar owner named Jake Wise (Woods).  Jake's girl, Jessie (Ward), had assaulted Jake and stole his money.  In addition, Jessie's mother offers Terry even more money to find Jessie, but Terry sticks with Jake's offer, in hopes that the score will be enough to tide him over until next football season.

Terry finds Jessie in Mexico, and the two actually began a relationship.  Eventually, Jessie goes back to Jake, and Jake's leverage over Terry causes him to get deeper and deeper into illegal activity.  Terry manages to escape Jake's plot to have him killed, and the rest of the movie revolves around how he escapes Jake's grasp, gets the upper hand, is forced to stop seeing Jessie, and ends up back on a new football team.