Home » silver-screen » Dramas » An Officer and a Gentleman

An Officer and a Gentleman 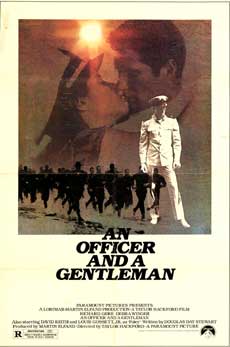 Released in 1982, An Officer and a Gentleman starred Richard Gere as Zack Mayo, Debra Winger as Paula Pokrifki, and Lou Gossett, Jr. as Emil Foley.  The film was well received by critics, and ultimately became the third highest grossing film of 1982.  It is still considered by some to be one of the best love story movies ever released.

In order to avoid turning out like his alcoholic father, Zack Mayo (Gere) joins the Navy to become a pilot.  The drill sergeant, Emil Foley (Gossett, Jr.), makes it clear to all new recruits that the program is mean to weed out the weaklings.  Although recruits are warned to avoid getting involved with the local girls, Zack starts dating a gal named Paula (Winger) that he meets at a Navy dance.

When the drill sergeant finds out that Zack has a side business on base selling already polished shoes and belts, he tries to make Zack so miserable, that he will voluntarily quit the Navy.  After Zack's friend kills himself over the pressure of the program, Zack decides to drop out, but drill sergeant Foley takes him under his wing and forces him to finish.  In the end, Zack not only graduates with honors, but also keeps the girl.

AN OFFICER AND A GENTLEMAN Japanese Souvenir Program 1982, Richard Gere
$1.50

An Officer And A Gentleman B&W Photo Poster Print
$9.75

AN OFFICER AND A GENTLEMAN GERE HOLDING WINGER CLASSIC!
$9.75