Home » silver-screen » Dramas » Born on the Fourth of July

Born on the Fourth of July 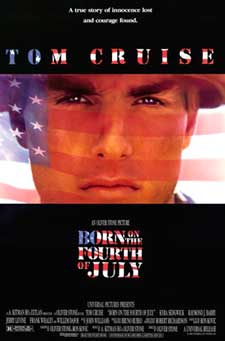 "A true story of innocence lost and courage found."  Born on the Fourth of July, starring Tom Cruise as Ron Kovic, was an award winning movie released in late 1989.  The movie was well received by critics, and stayed number one at the box office for a number of weeks.  Ultimately the film earned 161 million dollars on a 14 million dollar budget.

This movie is about the life of Ronnie Kovic (Cruise), a young man who leaves his perfect life behind to serve his country as a Marine in Vietnam.  On his second tour in Vietnam, Ronnie is shot, paralyzed, and confined to a wheel chair.  When he returns back home to the USA in 1969, he begins noticing how people, including his family members, treat him much differently due to his confinement.  As the years roll on, Ronnie becomes more and more disillusioned and begins aligning himself with pacifists and anti-war demonstrators.  At one point, Ronnie and another disabled vet decide to move to a resort in Mexico specializing in catering to disable vets with hospitality and call girls, but eventually he moves back to the USA.

Eventually, Ronnie comes to terms with the atrocities of the war and the role he played in it, even going so far as to visit the parents of a fellow soldier he killed by accident while in Vietnam.  By the end of the movie, Ronnie had become a legitimate political figure, even speaking at the 1976 Democratic National Convention after the publication of his autobiography, Born on the Fourth of July.

BORN ON THE FOURTH OF JULY Original American One Sheet Tom Cruise
$69.00