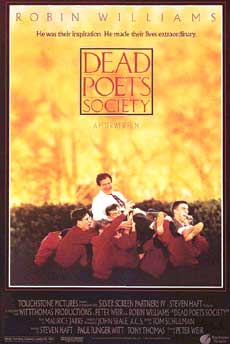 "He was their inspiration.  He made their lives extraordinary."  Starring Robin Williams as John Keating and Ethan Hawke as Todd Anderson, the award winning Dead Poet's Society was released in 1989.  Although it received mostly positive reviews, not everyone liked it, including Roger Ebert, who did not like Williams’ occasional stereotypical comic underpinnings.  Never the less, the film still did very well at the box office, and won a number of awards.

The movie revolves around a group of teenagers attending an elite private school in New England in the 1950’s.  The school has a very strict code of conduct, not only for its students, but for its teachers as well.  However, the new English teacher, named John Keating (Williams), is much more unorthodox in his teaching methods, which does not set well with the school’s leadership.  However, the students love him, and are inspired to revive a defunct, secret club of underground literature lovers, called the "Dead Poet's Society", which existed when Keating himself was a student at the school.

As the boys begin to become more politically bold, they end up drawing more unwanted attention to Keating, who tells them to try and be more subtle in their bucking of the establishment.  When one of Keating’s students commits suicide under the pressure from his parents to follow the path they have set out for him, the school is forced to investigate Keating.  The boys are forced into signing a document placing blame on Keating for encouraging the revival of the “Dead Poet’s Society”, and Keating is fired.  As Keating leaves, the students stand on their desk as a sign of solidarity, demonstrating that they still believed in him.