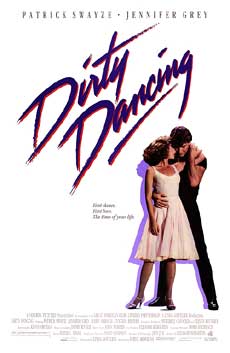 "First dance.  First love.  The time of your life."  Dirty Dancing, which starred Patrick Swayze as Johnny Castle and Jennifer Grey as Frances “Baby” Houseman, was a romantic drama released in 1987.  The film received mostly positive reviews, although some heavy hitters, like Roger Ebert, did not like it at all.  However, this did not matter, as teens flocked to the box office to see the movie.  The following year, it was the number 1 most rented movie.  In 2004, a sequel was released (Dirty Dancing: Havana Nights), as well as a stage show seen by many around the world.  At the time of this writing in late 2014, a remake of the original film was being planned.

In this movie, Frances "Baby" Houseman (Grey) is once again on vacation at a resort in the Catskills Mountains with her family.  What is different this trip?  She falls in love with the resort’s dancing instructor, Johnny Castle (Swazye).  Castle is also in charge a much of the blue-collar staff at the resort, who often gets together for after-hours parties, where they tend dance in dirty ways.  At some point, Johnny’s dancing partner is unable to perform at a big shindig that was coming up, so Johnny invites Frances to learn the dance and compete with him.

Eventually, the two fall in love, and begin a forbidden relationship.  When the resort staff finds out the Johnny has broken the rules by fraternizing with a guest, he is fired from his job.  Even though he was fired, Johnny returns to the final dance contest to compete with Francis.  In the end, everyone is so happy with their performance, that the haters make nice nice and the whole joint gets to jumpin’.