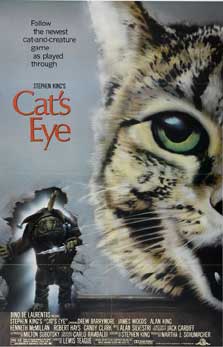 Cat's Eye, released in 1985, was based on a screen play by Stephen King.  This movie is a compilation of three vignettes, loosely related by way of a wandering cat named General.  Some of the starring cast that you might recognize included Drew Barrymore as Amanda and James Woods as Dick Morrison.  The film received mixed reviews, although most of them were positive.  Ultimately, the film did make money.

In this movie, General (the cat) is trying to reach a little girl (played by Drew Barrymore) who needs his help to save hers from a Troll.  At the start of his trip, General ends up with Dick Morrison (Woods), a smoker trying to kick the habit with the help of a mob-operated smoking cessation program.  In this quitting program, family members are tortured or raped when the smoker lights up.  Needless to say, Jack managed to quit.

In the second vignette, General ends up as a witness to a twisted love triangle between a mob boss and his wife's lover.  After a bet that goes awry, it is the mob boss who ends up dead.  In the end, General makes it to Amanda (Barrymore), and saves her from the troll that tries to steal her life away.  When her parent's realize how important General is, he is allowed to stay.