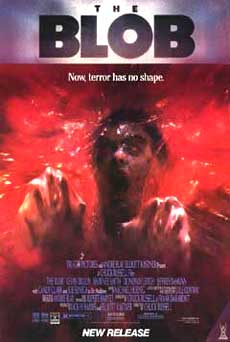 "Now, terror has no shape".  The Blob, released in 1988, is a re-make of a 1958 film starring Steve McQueen.  Although the original movie was a great success, this 1988 remake was not.  Not only did it receive mixed reviews, but it also lost money.  For those who were expecting a direct translation of the 1958 film, they were disappointed.  For example, in the original film, the blob was an alien entity, whereas in the remake, it was a biological weapon.

In this movie remake, a gelatinous glob of goop falls from the sky, and an old man goes to touch it and it attaches to his hand.  When three high school friends (Brian, Meg, and Paul) happen upon the injured man, they decide to take him to the hospital.  At the hospital, the blob devours the man, and then devours Paul before leaving the hospital.  The blob begins going about the business of eating up townspeople, including the police, while Meg and Brian try to come up with a way to stop it.  Brian finds out that the blob is actually a secret military weapon gone awry, and that the military will stop at nothing to destroy it, including the collateral damage of Brian’s friends.

The military soon finds it is unable to destroy the blob using conventional methods.  The blob continues devouring people until Meg realizes that the blob cannot stand cold things.  In the end, the friends manage to rig a truck full of liquid nitrogen to explode just at the right time, which causes the blob to freeze and shatter into multiple pieces.  In the end, at a revival tent meeting, the preacher holds up a jar containing a live piece of the blob, signaling the blob fiasco is not over.