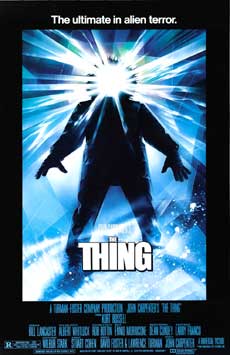 The Thing, released in 1982, was a science fiction horror movie that starred Kurt Russell as MacReady.  The movie did turn a profit, but not much of one, although it opened strongly.  The movies E.T. and Blade Runner were both released at the same time, which very likely contributed to its lackluster overall sales.  The movie received mixed reviews, even from the same critics.  Roger Ebert said he did not like the movie, but that he did find it scary and thought it a good "barf bag" movie.

In this movie, a group of 12 men, who are basically trapped at an Antarctic research station, decide to thaw out a frozen alien they find under the ice.  What they do not know is that this alien is a parasitic life form that is able to assimilate any biological form, from dogs to humans.  MacReady (Russell) is sent to investigate and they discover a 100,000 year old alien craft buried in the ice.  After the alien creatures begins assimilating, and ultimately eliminating the researchers one by one, paranoia runs deep.  In the end, MacReady must blow up the entire research station to stop the alien threat.