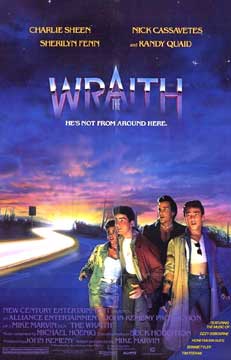 Wraith was a 1986 flick that lands some place between action and horror.  The movie starred Randy Quaid as Sheriff Loomis and Charlie Sheen as Jake Kesey (the Wraith).  Although the movie made money, it was far from a blockbuster.  It has become an 80's cult classic in some circles.

In this movie, Packard Walsh is the evil leader of a car thieving gang who basically steals cars from folks he ends up drag racing against.  Everyone in town knows he has murdered a local man, but without any evidence, the police cannot prosecute him.  So Walsh continues terrorizing the public, until a Dodge M4S Turbo Interceptor, named the Wraith, comes to town.

The driver of the Wraith, covered in black and always wearing a helmet, shows up at Walsh's races and begins killing gang members.  Around the same time, Jake Kesey (Sheen) shows up in town and befriends Walsh's girlfriend, Keri.  Packard, being the only gang member still alive, confronts Kesey.  In one final race, the driver of the Wraith kills Packard in a fiery explosion, and it is soon realized by all that Kesey is the Wraith.  To makes things even more confusing, Kesey is the reincarnation of the man that Packard murdered.  In the end, Jake wins the girl and rides off into the sunset.

CHARLIE SHEEN POSTER The Wraith or THE EXECUTOR IN SA YEAR 1986 ORIGINAL
$50.00