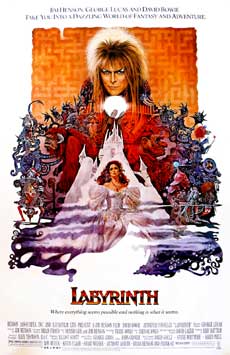 "Where everything seems possible and nothing is what it seems."  Labyrinth, starring the late David Bowie as Jareth the Goblin King and Jennifer Connelly as Sarah Williams, was a Jim Henson directed flick released in 1986 (produced by George Lucas).  It was more of a fantasy movie than science fiction, but we include it here because it did not seem to fit well anywhere else either.  The film received mixed reviews back in the day, with some critics feeling like although it was fantastic in nature, it never really got off the ground.  It was a flop at the box office.

In this movie, Sarah wishes that the goblins she reads about in one of her fantasy books (called Labyrinth) would come take her baby brother away (she is tired of babysitting).  When the goblins fulfill her wish, the Goblin King (Bowie) tells her he will return her little brother if she can solve the within 13 hours.  After being transported to the land of the Labyrinth, she begins her quest, running into a number of creatures and obstacles along the way.

With the help of the friends she makes along the way, such as Hoggle the dwarf, Ludo the beast, and Sir Didymus the fox, the group makes it to Jareth’s castle.  Just when it appears that Jareth has won, Sarah remembers the words from the book that render Jareth powerless, and Jareth is forced to return Sarah, and her little brother, back to reality.