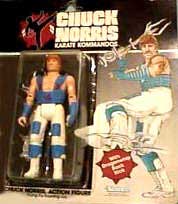 The guy can not act, but he can sure fight.  There was a very short cartoon series called Chuck Norris and the Karate Kommandos that aired in 1986 and spawned this line of action figures.  In the cartoon, the Karate Kommandos would battle the evil VULTURE organization, headed up by a dude called The Claw and his main henchman, Super Ninja.  A series of action figures were released based on the show, and they included not only the Claw and Super Ninja, but also the Kommandos:  Chuck Norris, Pepper, Reed, Kimo, Tabe, and Too Much.