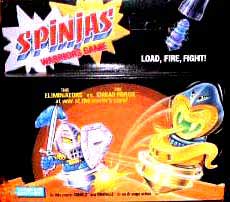 The Spinjas, as the name suggests, had something to do with Ninjas, and something to do with spinning.  It was actually a ratcheted spinning top game released by Parker Brothers in the late 1980’s.  Essentially, you would take two Spinja characters, wind them up using the Power Winder, and then launch them into the Battle Stadium, where the last Spinja standing was the victor.  You could buy additional Spinjas, as well as larger playing arenas.

There was a story line behind the Spinjas (of course), and there were ultimately two Spinja factions:  The Elmiinators, led by Emperor Gar and Champion Shotgun, and the Dread Force, headed up by King Dethblo and Champion Switchblade.  Each faction had a small army of Spinja fighters.  There were a total of 24 characters which could be distinguished by the colors of their spinning tips.  Each character had a slightly different spin based on its weight distribution, so the victor was practically random.