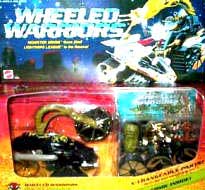 Based on a cartoon called Jayce and the Wheeled Warriors that first aired in 1985, the Wheeled Warriors toy line, created by Mattel, consisted primarily of action figures with a few vehicles and play sets.  The premise of the cartoon was the classic battle between good and evil.  On the good side was the Lighting League, a group of humans led by a teenager named Jayce.  Some of the Lighting League characters were Audric, Gillian, Flora, and Oon.

Jayce and the wheeled warriors Beast Bazooka and Flare Terror
$8.00