The WWF Wresting Buddies of the 1980’s, made by Tonka, were essentially dolls for boys.  They were plush likeness of the big name wrestlers of the day, such as the Ultimate Warrior, Macho Man (King) Randy Savage, Million Dollar Man, and Hulk Hogan.   They were pretty big as far as dolls go (more like pillows), and the commercials would advertise boys getting together and performing body slams on their dolls.  The back of the box they came in showed other moves you could perform, such as the sleeper or headlock.  They have continued to produce these over the years using the likenesses of contemporary wrestlers, and the WWE has their own version, called the Brawling Buddies.

And of course there were also tons of other WWF related toys that came out of the 1980's, including WWF action figures like the ones pictured below. 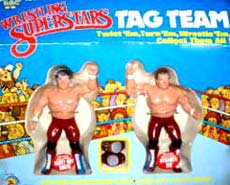