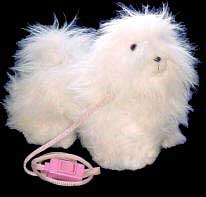 What decade wouldn't be complete without an animatronic dog?  The Furreal Go-Go My Walking Pup was one of those 80's toys that was fun for about 15 minutes.  We admit, they were easier to take care of than a real dog.  They were produced by Hasbro and came with a leash, brush, and a ribbon.  The end of the leash had a control pad that allowed you to make the dog walk forward or backward. Although they first came out in the late 1980's, the continued to be produced well into the 2010's.