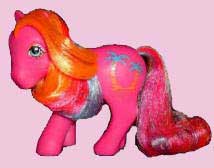 My Little Pony continues to be a popular toy line with kids.  It was popular enough in the 80's to warrant a cartoon that first aired in 1986, and a re-boot cartoon series in 2010.  My Little Pony was developed by Hasbro in 1983 as an off-shot of their earlier My Pretty Pony toy line (also Earth Ponies, Pegasus Ponies, Unicorn Ponies, Flutter Ponies, Sea Ponies, etc.), and they were primarily marketed to girls.  Each little pony was very colorful, came with long hair, and had a unique symbol.

There were a number of different My Little Pony variations produced, such as Rainbow Ponies, So-Soft Ponies, Twinkle-Eyed Ponies, Twice-as-Fancy Ponies, Brush 'n' Grow Ponies, Pony Friends (not horses, but other animals), and Baby Ponies.  Some other off-shoots of the original My Little Pony were Petite Ponies, Dream Beauties, and My Little Kitty/Puppy/Bunny.