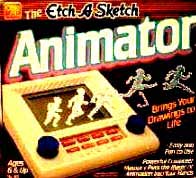 There is little doubt that the original etch-a-sketch, which has been a part of almost everyone's life at some point given that it was first created in 1960, was totally lame.  Okay, we admit, we couldn't really draw any decent thing with it, but we admit there are some people out there who are very good with them.

The etch-a-sketch animator was the second iteration, released in 1986, and it featured a low resolution dot matrix screen and a speaker.  It had a small amount of memory that would allow the user to save 12 images that could be strung together to form a little cartoon.  In 1988, the Etch a Sketch Animator 2000 was released, which featured storage for 22 images, as well as game cartridges for games like "Fly By", "Overdrive", and "Putt-Nutts".

ETCH A SKETCH ANIMATOR ADVERTISING DISPLAY 1987 Super Rare maybe one of a kind
$59.64