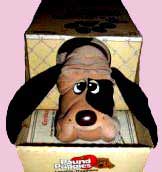 This was very clever marketing.  The idea was, you had to adopt a stuffed hound dog from the dog pound before it was incinerated into carbon ash (or something like that).  Pound Puppies, which were created in 1984, were so popular, that Tonka grossed over $300 million dollars in sales over a five year period.  The craze eventually culminated in not only animated specials and a cartoon series (1986-1989), but also a full feature film in 1988 (Pound Puppies and the Legend of the Big Paw).  Manufacturing continued well into the 2000’s, although the puppies became more sophisticated (animatronics, barking sounds, etc.).

The Pound Puppies were basically plush dogs were Hound like with floppy ears and a droopy disposition.  Each puppy came in a dog house shaped box with an adoption certificate.  There were two sizes the puppies came in.  Based on the same premise as the Pound Puppies, kids were also bamboozled into adopting a kitty cat before it was gassed and used as fertilizer.  These were called Pound Pur-r-ries.  Each line also came with a number of accessories that went along with them.  Some of you may even remember that the fast food chain Hardees put them in their happy meals.