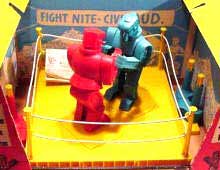 The Rock 'em Sock 'em Robots toy was first released in 1964 by Marx Toys.  In essence, each player took control of one of two boxing robots (Red Rocker or Blue Bomber) in an attempt to knock their opponent’s head off.  Each player would use their respective joystick to move their robot’s arms and position in the ring.  As cool as the game looked, and as neat as the premise sounded, it was actually kind of boring.  Punch the other robot in the chin, and "sproing" goes his head, about one inch into the air (referred to by the game players as knocking the other player's block off).  The game was known as Raving Bonkers in the UK.  In the 2000’s, a new and improved, albeit smaller, version of the game was released by Mattel.

NEW ROCK'EM SOCK'EM ROBOTS is BACK "THE ORIGINAL FIGHTING ROBOTS" by MATTEL
$24.99