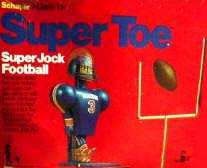 Super Jock was a toy made by Schaper Toys in the mid 1970’s.  We include them here because we remember playing with them well into the early 1980’s.  There were later manifestations of the Super Jock sports series, but nothing beats the 1970's versions of the game, including the Super Jock Super Toe pictured here.  The box came with the kicker, a ball, and the goal posts.  There were other sports as well, such as basketball, hockey, baseball, football and Soccer.  A person would pound the figures on the head to get them to kick a ball through the posts, or shoot a ball in the basket, or hit the puck.