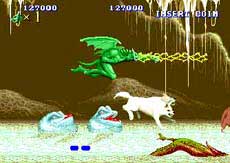 Altered Beast was one of those great Sega games that many of you might not have been exposed to until you received that Sega Genesis at Christmas (it often came bundled with new systems). The game itself could be found in malls, skating rinks, and gas stations in 1988. The game follows the exploits of a Centurion in Ancient Greece, who is raised from the dead by Zeus, given special powers, and sent on a quest to rescue Zeus' daughter, Athena, from a demon god called Neff. Fans of the game will remember that it was a left to right scrolling game, and the Centurion could get power ups that would "alter" him into different beasts, like a werewolf or a bear...hence the name of the game. This allowed him to fight against zombies, flying demons, big chickens, dragon snakes, pig men, goat men, huge leeches, and of course Neff, who transforms himself into a number of different bosses. 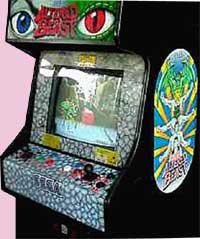