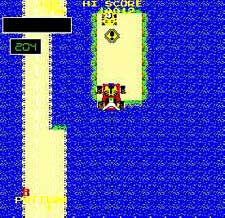 Bump ‘n’ Jump was released by Data East (or Bally Midway) in 1982. In Japan, the game was known as Burnin’ Rubber. Bump ‘n’ Jump was a bird’s eye view racing game. The story line of the game was that the player’s girlfriend was kidnapped by the Black Army Corps, and that the player must rescue here by racing through levels and bumping enemy vehicles into various obstacles while jumping over other obstacles at the same time (thus the name Bump ‘n’ Jump). Obstacles were such things as highway overpasses and huge rivers.

Many of you will remember the 8 bit NES version of this game, where additional complexity was added by needing to maintain a fuel level by collection gas cans, not being able to see obstacles until the last minute, slippery roads, and only being able to destroy large trucks by jumping on them.