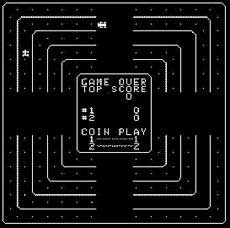 Crash was an Exidy game released in 1979.  Like many arcade games of the late 70’s, it was monochrome with a color overlay.  In some ways, Crash was a cross between Pac-Man and Rally X.  The player would drive a car around a track, clearing dots while avoiding the other car on a collision course by making the correct lane changes.  Each dot was worth 10 points, and bonus points were awarded if the player was able to collect all the dots.  As the game progressed, the number of enemy cars increased.  The player could make the car go slow or fast.  Going slow allowed the player to change multiple lanes at a time, whereby going fast would limit the lane change to a single lane at a time. 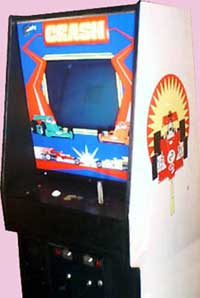