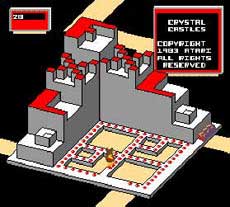 Crystal Castles, released by Atari in 1983, was one of the first games that had a finite ending.  Most games of the time had indefinite loops, whereby the user would start over at the first level after completing the final level.  The player of the game controlled a little bear, named Bentley Bear, through various castles while collecting gems and avoiding enemies.  Character control was by way of a trackball and a jump button.  There were 10 total levels and 37 total castles.  Each castle was successfully traversed when Bentley collected all the gems.  There were ways to jump between castle levels using secret warps.

During gameplay, enemies could also collect the gems, which would ultimately result in lower the player’s score.  There were a number of bonus objects along the way that helped in defeating the enemies, such as a hat that allows the player to defeat Berthilda (the witch), and a honey pot that allows the player to avoid a swarm of bees.  Other enemies included mean trees, dancing skeletons, ghosts, little creatures that eat the gems, and orbed shape critters that follow Bentley around. 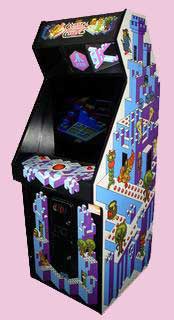 Crystal Castle was popular enough to warrant a number of home versions.  There were versions made for the Apple II, the Commodore 64, a simplified version for the Atari 2600, and many others.  In later years, Crystal Castles could be found on Atari: 80 Classic Games in One!, Atari Anthology, and Game Room for systems like the Xbox, PlayStation, and modern PC.