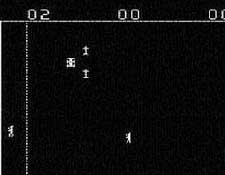 Death Race (aka Death Race 2000) is one of the few 1970’s arcade games we feature here.  We include it not only because it was still popular in the early 1980’s, but also due to its somewhat controversial nature.  It was released by Exidy in 1976, inspired by a 1975 movie called Death Race 2000, and was one of the first games to feature vehicular combat.  In the game, up to two players controlled a small car by way of steering wheel and a gas pedal, in an effort to run over little stick people who were escaping the cars.  The more stick people you ran over, the higher your score.  Each time a stick figure was hit, it would scream out and be replaced by a tombstone.  As the screen becomes ever more cluttered with tombstones, maneuvering becomes increasingly more difficult. 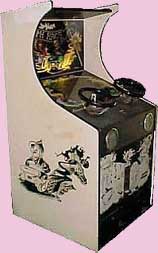 The monochrome resolution of the game was rudimentary, at best, as was all games in the mid to late 1970’s.  The arcade cabinet itself was much more colorful and impressive.  The game was initially titled “Pedestrian”, which put the media up in arms.  60 Minutes even did a story on the influence of violence in video games, and Death Race was featured.