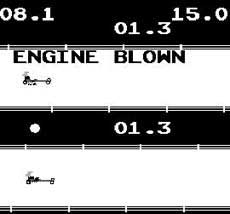 Drag Race was released by Kee Games in 1977.  This game is one of a handful of 70’s games we feature on this site due to the fact that it was around in the early 80’s.  Fans of this game will remember that two people, in two player mode, would drag race each other using a pedal, steering wheel, and four-gear shifter.  Shifting had to be done just right by watching the tachometer on the screen.  If the player shifted to late, the engine would blow, and if too early, the drag racer would bog down. 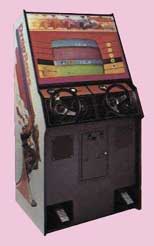 Simple games like this were a windfall for early home console systems like the Atari 2600.  Although Atari did not release this exact game, they had a version called Dragster.