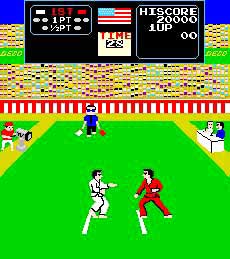 Karate Champ, one of our favorite 80’s arcade games, was released by Data East (1984) in the USA.  In the game, the player assumed the role of a Karate tournament participant who must fight competitors.  The player could either play against the computer, or another human player (this was really fun).  Each player had to joysticks that could be maneuvered in various combinations to create offensive and defensive moves.  The first player to reach two full points would win the match.  Different offensive moves had different point values.  Some were worth ½ a point, while others a full point.  You could punch, reverse punch, round house kick, back kick, jump kick, foot sweep, and many more.  As far as defensive moves went, you could block high, block low, and even do somersaults.

There was another version of Karate Champ released the same year, called Karate Champ Player vs Player, which was essentially the same as the original, but has players fighting for girls at various stadiums around the world.  The game was released for the Commodore 64, Apple II, and later for the NES.