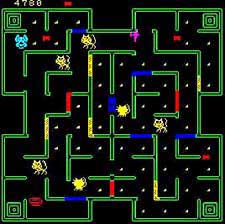 Mouse Trap was a 1981 arcade game released by Exidy.  Mouse Trap was very similar to Pac-Man.  In this game, the player controls a mouse that must eat all the cheese in a maze in order to proceed to the next level.  Along the way, the mouse must avoid the cats while eating cheese.  Eating a power-up, in this case a bone, would turn the mouse into a dog, which would in turn allow the player to eat the cats.  Although the similarities to Pac-Man were obvious, there were significant differences as well.  For example, in Mouse Trap, the bones could be collected and used later, the mouse could open and close doors, there was a hawk that would come out and eat the mouse (or dog), and point bonus items included things like a paperclip or diamond ring. 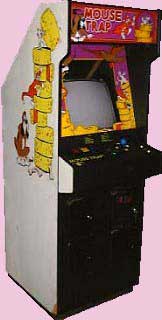 Home versions of Mouse Trap were created for a number of consoles, such as for the Atari 2600, ColecoVision, and Intellivision.  Some of you Buckner & Garcia fans will remember that the band recorded a song about this game, called “Mousetrap”, which was released in 1982.  This is the same group that had a top 10 hit with the song “Pac-Man Fever”.