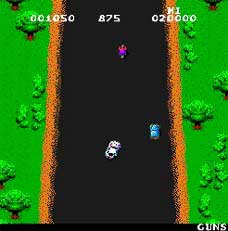 Spy Hunter was a top down arcade scrolling game released by Bally Midway in 1983.  The game could be found in both sit-down and standup form, and it was extremely popular.  With a steering wheel, weapon buttons, a gas pedal, and a two-gear shifter, the player would essentially race their spy car along the road, blasting or knocking enemies off the road.  The player’s car could be destroyed by collision, by helicopter, by enemy weapons, or by an enemy forcing the player’s car off the road.  From time to time, a weapons van would drive by, and if the player drove up the van’s ramp, the player’s weapon systems would be upgraded.  Upgrades included James Bond type gadgets like oil slicks, smoke screens, and even surface to air missiles.  There was even a boat house the player could drive through which would temporarily turn the player’s spy car into a spy boat.  Once all the player’s lives are depleted, the game was over. 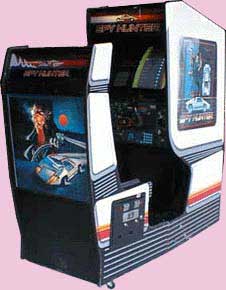 Spy Hunter was a huge success.  A pinball game version was released in 1984, and Spy Hunter II hit arcades in 1987.  Spy Hunter II featured improved graphics and cooperative play, but it was not as successful as its predecessor.  There were a number of versions of Spy Hunter developed for home systems like the Atari 2600, ColecoVision, Commodore 64, the NES, and many more.  There was even a version for the NES called Super Spy Hunter.  As the years rolled on, the original game was re-released for contemporary systems like the Xbox, Wii, GameCube, GameBoy, and the PC on the Midway’s Greatest Arcade Hits and Midway Arcade Origins compilations. 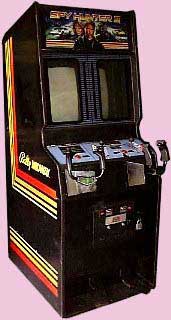