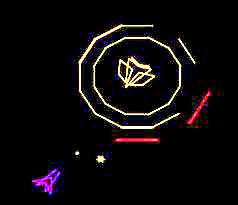 Star Castle was a vector-based arcade game released by Cinematronics in 1980.  The object of the game was to destroy the enemy cannon which was placed inside three concentric, rotating energy rings.  Mines and enemy ships would pass through the energy rings to attack the player.  The player's spaceship could rotate around the energy rings and shoot at the ring's sections.  Each ring had 12 sections; each section would have to be hit twice to destroy the section.  Once a section was destroyed, a nicely time shot could then be used to hit the next energy ring section underneath.  If all of an energy ring was destroyed, it would be re-spawned and homing mines would be created.

Once enough sections were destroyed to expose the enemy cannon, the player would need to blow up the cannon.  However, it was at this point that the game became more difficult as the enemy cannon would fire much larger projectiles.  If the player managed to blow up the inner cannon, then they  were awarded an extra ship, and game play continued to the next level.  Subsequent levels would include faster rotating rings, a better aiming inner cannon, and meaner ships.