Street Fighter was an arcade game developed by Capcom in 1987.  Although the game was not as popular as Street Fighter II (1991), it nevertheless was the basis for all Street Fighter releases to come.  In the game, the player competed in a number of one-on-one matches with different computer controlled opponents, or simultaneously against another player, as a martial artist name Ryu.  Each match is three 30 second matches, and if the opponent is not knocked out, the player with the most energy at the end of the last round is declared the winner.  Other than Ken (player two), other opponents included Retsu the martial arts instructor, Geki the ex-ninja, Mike the boxer, Lee the Chinese boxer, Gen the assassin, Birdie the bouncer, Eagle the body guard, Adon the Thai master, and Sagat the Emperor. 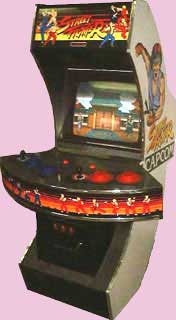 The player was required to win 2 of the 3 rounds to advance to the next fight.  Unique to the controls on some versions of the game were two buttons that would registered how hard the player pushed them, and the kicks and punches would be hard or light accordingly.  In all cabinet versions, a combination of joystick and button pushes would create a variety of special moves against one’s opponent.

Street Fighter was released on a number of home consoles of the late 80’s, such as the Commodore 64, and on later consoles (Xbox, PlayStation, Wii) as part of the Capcom Collection Remix and Capcom Classics Collection.