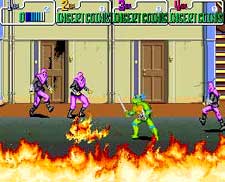 Teenage Mutant Ninja Turtles was a side scrolling beat-em up game released by Konami in 1989.  The game’s release was sandwiched between the cartoon series, which started in 1987, and the 1990 full length, live-action movie.  There were both 2 and 4 player versions of the game available, allowing the player to choose their character (Leonardo, Michelangelo, Donatello, or Raphael).  Each character had their unique qualities.  The premise of the game was simple:  Rescue Splinter (their master) and April O’Neil (their friend) from their nemesis, Shredder.  Using combinations of an 8-way joystick, a jump button, and an attack button, the player could perform a number of special moves, such as throwing foot soldiers over the player’s back.  Players could also use objects on the screen to aid in the defeat of the foot soldiers, such as exploding oil drums and fire hydrants.  Bosses in the game included Bebop, Rocksteady, Baxter Stockman, Granitor, General Traag, Krang, and of course Shredder. 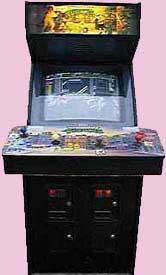 Many of you played versions of this game on your NES, which was one of the more popular Nintendo games released.  In later years, the game was re-released for Xbox, PlayStation, and the GameCube (Wii).