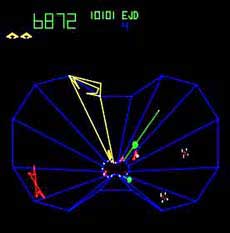 Tempest was a “tube shooter” game released by Atari in 1981.  We dedicate this page to my brother, Shaun, who really loved to play this game (we did not like it).  One unique feature of the game was the ability to start it at either the first stage, or at any number of more difficult stages.  The basic object of the game was to stay alive as long as possible by destroying enemies that would emanate from the center of a geometric shape outward.  Using a rotary knob, the player would move around the various segments of the playing fields, using the fire button to shoot at the enemies and a super zapper button to blow everything on the screen up at once.  Once all the enemies were destroyed, the player would move on to the next level by warping into the center of the geometric shape. 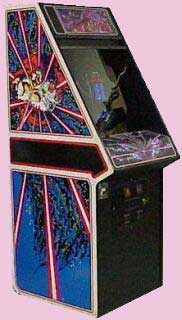 There were a total of 16 different geometric shapes.  If all of the 16 stages were completed, the game would start over at stage 1, and each level was increasingly more difficult than its predecessor.  Tempest was released in later years as part of the Arcades Greatest Hits: The Atari Collection, Atari Anthology, and a number of others for systems like the Xbox, GameCube, Wii, and PlayStation.